The road that passes in front of Charlie Case's homestead is rutted from horse-drawn wagons and old trucks and cars. This road used to be the only road between Milesville and Philip, SD in the early 1900's. The only traffic this old road sees is a nearby rancher or a wandering photographer.

Charlie Case lived here with his wife, Ann, and a son, Clarence, from the turn of the 20th century to the 1940's. Charlie was a short man, good humored, and had three fingers missing from one of his hands. His son "didn't do much work", as I was told. All three are dead now.

Gone are the fences that carried the first telephone line from Philip. The phone line used existing barbed wire fences. When the phone rang at the Case's, it rang at all the neighboring ranches and anyone could listen in on the conversation. It worked well unless one of the cattle broke the wire somewhere along the fence line.

Charlie was known for his self-taught veterinary skills. He was not licensed and he never charged a fee. There was no anesthetic for the beasts other than twisting a leather "switch" on the animal's nose when Charlie cut out lump jaw, pulled teeth, castrated, or performed other surgeries.

When a rancher needed medical attention, surgery might be performed without anesthetic and often by the patient's own hand. On a bitter cold winter day in the 1930's, Charlie's neighbor, Bob Jetters, had his arm caught in a power takeoff while feeding cattle. He might have frozen to death before help arrived, so he amputated what was left of his own arm and walked a mile or so to the nearest road to flag down a passing motorist.

On this particular day in May of 1996, I waited for about an hour for the sun to highlight the house. The sky and the subject had personality. There was only the sound of the wind and rustling prairie grass. I had time to wonder what life was like years ago; long before I stood in front of the house with a camera and a tripod. 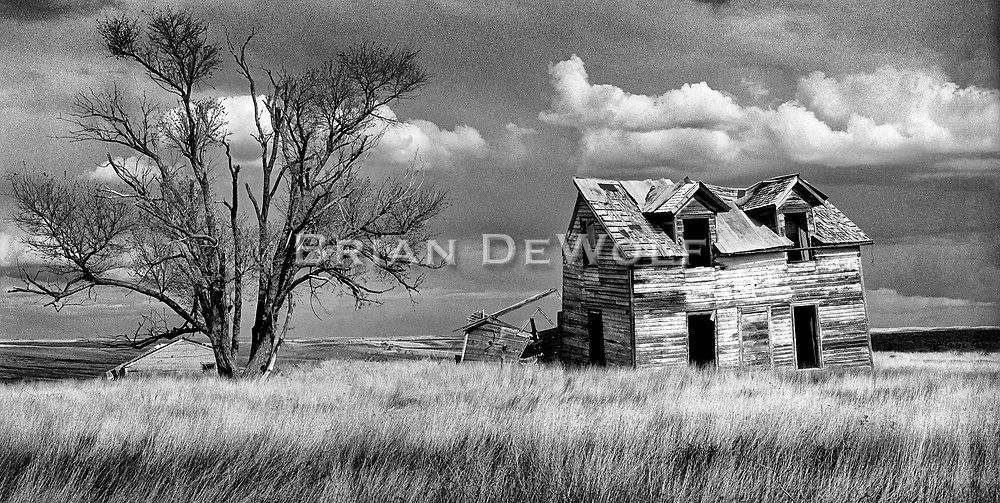